“The first thing is to get rid of the intimidation. We’ve had women show up on bikes that should not be ridden on trails. We will never ridicule that; we’re going to support any woman being on a bike. Some women, if you make fun of them, will never return to mountain biking.”

Our first interview is with Cacia Lewis and Tess Coles, two of the founders of Dirt Dolls, a women’s mountain bike group in Idaho. Dirt Dolls has about 120 women on its email list, more than 600 Facebook followers and anywhere from 20-70 people showing up for weeknight rides. There is no fee to participate.

Several years ago, Cacia decided she was tired of being the only one in her group of female friends that was into bikes. She had been riding her whole life and got much more serious about it after meeting her husband. When she realized she wanted more women to ride with, she remedied the situation by convincing a few friends to try mountain biking, hooked them at a women-only bike skills clinic, then helped start Dirt Dolls: the kind of group she had been looking for.

Tess discovered mountain biking after a breakup; it was something that could be hers because she hadn’t done it with her ex; it didn’t relate to him and didn’t make her think of him. She fell hard for the activity and now feels there is nothing like earning a climb, enjoying a beautiful view, then experiencing the rush of a downhill ride.

Dirt Dolls is primarily focused on beginners, with the goal to get women on bikes in a fun and open environment “with no expectations but smiles.” The three founders pride themselves on doing everything the “right” way, as they said. Cacia is a level 1 certified ride instructor (via the IMBA Instructor Certification Program). Dirt Dolls also follows and teaches the rules of the trail and encourages community involvement—including doing trail work—supporting local MTB groups and volunteering at events like Boise Bike Week.

“It’s part of our responsibility to spread the word that if you love biking, you need to show up and support local mountain biking.”

Have a strategy for true beginners, and other organizational tips

Cacia and Tess emphasized that the group works hard to establish a welcoming environment. A big part of that is having other women ready and willing to help out on weekly rides. When someone shows up who hasn’t been on a bike in a very long time, they get assigned an individual to ride just with them, answer questions and provide encouragement and assistance. Dirt Dolls also doesn’t send out ride groups larger than 10, and aims for 2-3 leaders in each group so that someone can peel off and accompany a rider who is having a bad day or got in the wrong group and needs to stop early or, on the flip side, can lead a stronger rider up to a faster group. Sweeps are required to have a certain level of local trail and maintenance knowledge, as well as specific tools in their packs.

Often, during rides, the group will stop at a technical section and discuss technique before tackling it. Often, the participants respond with, “Oh, my gosh! No one ever talked to me about technique before; they always told me to just do it.” And they never drop anyone. Even if there’s someone who can only ride one mile, they make sure someone is with that woman to ride that one mile with her. That’s what keeps people coming back.

Not charging anything also helps entice women who want to just try out this mountain biking thing but aren’t certain enough to pay a member fee. The leaders also focus on including skills and self-sufficiency tips in emails and Facebook posts—things that demonstrate the Dirt Dolls’ value beyond just ride nights. They also start every ride with introductions to eliminate some uncertainty and prevent the group from feeling too cliquish for newcomers. And finally, every ride is followed up by dinner and/or drinks so that the riders all have a chance to socialize and get to know one another, regardless of the level at which they ride.

“One time, we had a woman show up to ride whose husband had just passed away. She thought she could ride out some of her emotions, but it didn’t go so well. We told her it was going to be OK and there would be a better day when she could join us again, and we just got her back down the hill. That’s why this works; we don’t leave anyone on their own.”

But there’s room for Strava leaders and pros, too. Dirt Dolls offers intermediate and advanced rides that attract high-level riders. Even though the rides might still be far below their skill levels, many of the area’s top women are attracted to the atmosphere. It gives them a chance to be social with other female mountain bikers at their level and meet people with whom they can go mash and shred on other days of the week. 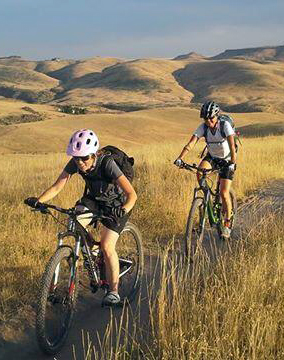 Advertising, liability issues and the future

The group thrives largely on word of mouth and has succeeded in growing organically. They don’t have allegiance to one, single bike shop or local mountain bike group, partly because they want to be able to steer Dirt Dolls riders to the shop or group nearest and most convenient to them. They also don’t align with any specific companies, because they want their riders to feel that they have freedom to get the gear that works best for them. As the group grows and develops a positive reputation, bike shops have started to tell female shoppers about it, encouraging new riders to participate.

The leaders also carry business cards that advertise Dirt Dolls and will pass them out to women they see riding local trails, particularly if that woman is struggling or being dropped by a man.

So, what about legal stuff? Mountain biking is inherently dangerous, so the founders met with a lawyer in the beginning to figure out what was what. The legal advice they received was this: since they aren’t charging a fee and are forthcoming about the risks (Dirt Dolls requires all riders to sign a waiver), a rider could sue if they got hurt—sure—but she probably wouldn’t get very far because participation is voluntary and without charge.

Since Dirt Dolls doesn’t collect money from its riders, it can’t afford insurance, anyway, but it did align with the local IMBA chapter, the Boise Area Mountain Bike Association, for some level of protection under that group's insurance. Also due to liability issues, Dirt Dolls does not host MTB skills clinics, but instead recommends existing area clinics and skills coaches to its riders.

Cacia and Tess believe that one of the reasons Dirt Dolls has been so successful is that they (and their other co-founder, Amy) treat it like a business, maintain constant communication and have regular planning meetings. As Cacia put it: “We don’t want to get a bad rap because women show up and experience a shit-show.”

This year, the Dirt Dolls will create a separate group for women who want to participate in Idaho’s first-ever enduro series. It won’t be a part of their weekly rides, but will offer a team and a home to any woman wanting to try racing.

To learn more about the Dirt Dolls, visit its website.

This blog series is introducing all 21 women who work for IMBA in some capacity. We are just regular people who happen to have cool jobs. Interspersed will be our stories, from personal experiences to what female participation looks like from inside the mountain bike industry.

This blog series is introducing all 21 women who work for IMBA in some capacity. We are just regular people who happen to have cool jobs. Interspersed will be our stories, from personal experiences to what female participation looks like from inside the mountain bike industry.

The Shame, Glory and Persistence of Learning to Mountain Bike

A Weekend in Fruita With the Ladies of IMBA

Something Big is Happening in SoCal!

Responsible riding is our simplest, and a very powerful, advocacy tool. Want more trails? Want to maintain access? Want everyone to like us? Start by being good to your fellow mountain bikers and the other users we share trails with. Know the rules; ride responsibly.

Our vision is that everyone has a place to ride a mountain bike. You can help make that happen!

The guidance on this website, and in other IMBA documents, is for reference only and should not be interpreted as a standard, specification or regulation. Mountain biking is inherently risky and could result in injury or death.